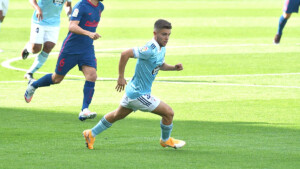 A moment of extreme happiness for the celestial quarry. Lateral Sergio Carreira made his debut this Saturday in the First Division against Atlético de Madrid. He also made his debut as a starter in Oscar Garcia’s team.

The extraordinary work of the RC Celta in the youth academy is rewarded with moments like this, the debut with the first team of a player formed in A Madroa and that joins the debuts this season of Gabri Veiga, Jose Fontán and Miguel Rodríguez.