Solidarity actions: great learning and a sea of emotion in the sky-blue academy

Celta’s academy, an international reference due to its good work, multiplies its efforts to grow and improve in any which way. One of its most important aspects, not only for RC Celta but for its Foundation as well, is training and educating its youth players, not only as athletes, but also as human beings spreading values such as fellowship and solidarity.

There are many initiatives that are developed at a Madroa with the aim of spreading these values and among them is a recent one, carried out under the slogan “Solidarity Actions”, which has brought out a sea of emotion and a great learning for the protagonists. The players and managing staff of the youth categories, from the “Benjamin B” to the “Juvenile A” teams, which have participated with enthusiasm in this initiative and in which the young footballers and managers who have designed and developed the activities which have been performed.

The “Benjamin B” team organized, jointly with the Chain CF, a fun-sports day with the dual objective of bringing together food and toys for the underprivileged and to raise awareness among the youngest about the basic needs that still have to be covered today in society. The day consisted in the celebration of numerous playful and traditional games and concluded with F-8 matches. The food and toys collected were delivered to the municipality of Gondomar.

The RC Celta “Benjamin A” team enjoyed a day of retreat with the members of the Celta Integra team. Both squads shared an afternoon snack, talks on integration and tons of fun learning moments. Finally they played a great pick-up match.

The “Alevin B” team began a campaign to collect toys to donate them to the children of Ayuvi (Association of Aid to Life in Vigo). The experience was very emotional and rewarding. The sky-blue players were greeted at the headquarters of Ayuvi with great affection and lived an unforgettable experience with the children fostered in the aforementioned Vigo entity. 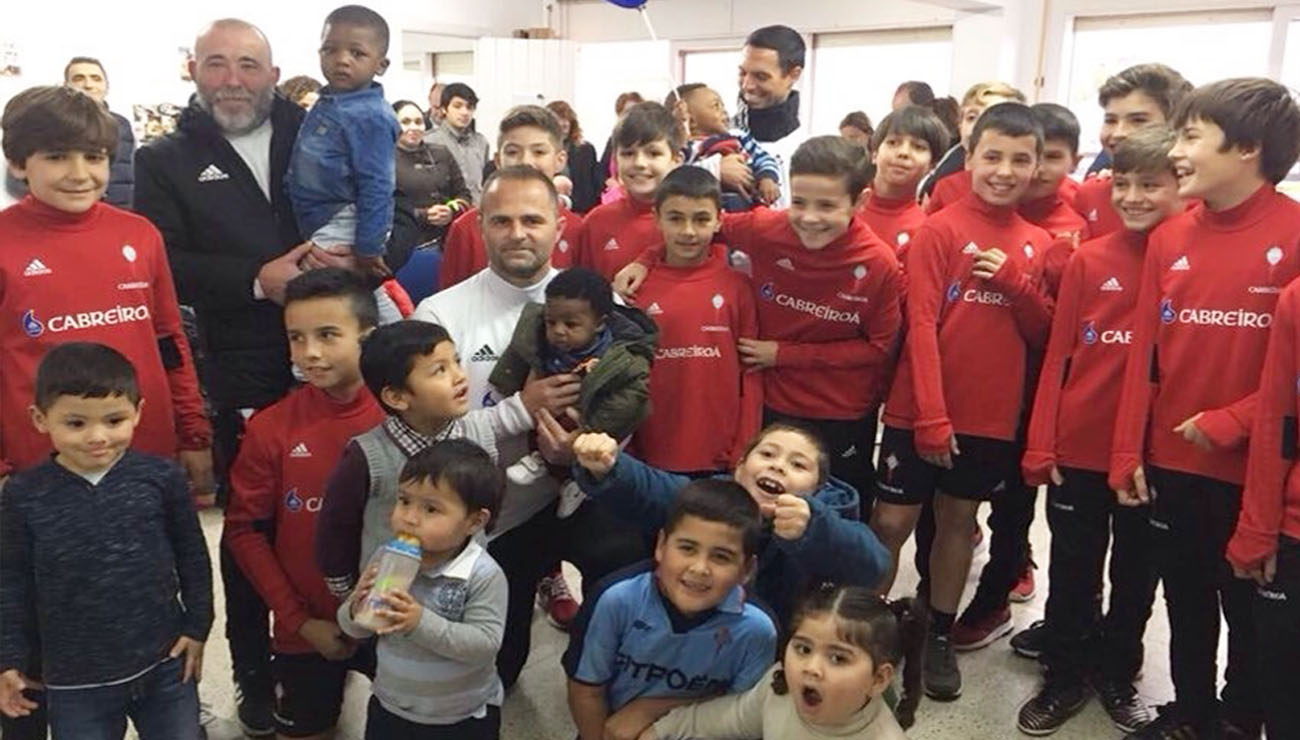 Players and managers of the “Alevin A” team experienced a similar experience. They visited Hogar Santa Isabel to give away toys, clothing and food which they had previously collected. Once there, they visited the facilities and had a nice talk with the mothers and children fostered there. An unforgettable experience.

The “Infantil B” visited Ponte Solidario, where they attended a talk on behalf of two people who collaborate with the association and donated food and a Celta jersey signed by all the players.

The RC Celta “Infantil A” team visited in Campeche, México, the humble team Auténticos Leones, located in a deprived area, where a short clinic took place. The event started out with a small presentation of the club, of the team and managing staff. Then the action moved on the playing field of the host club. There the sky-blues performed different drills with the local players and then played a friendly matches where the teams where divided by age groups. To finish off this part of the activity the local manager arranged a match between the local club’s under-17 team and Celta’s Alevin one, since the local players felt very excited to play against a Celta team according to the local team’s manager.

organized a collection of toys with the purpose of delivering them to one of the collection points established in the city, specifically in Florida, while the “Cadete A” team participated in a joint talk with Matama’s women team against gender violence given by a representative of the Emergency Centre for Women victim of gender-based violence. After the talk, both teams played an F-8 match in which each team aligned players of both genders.

The “Juvenile B” team spent the day together with the group ACEESCA (Regional Association of Special Education Most Holy Christ of Love) of Porriño, where it was planned to make a joint photo calendar of with their students so they can sell it and get funds, and also various recreational activities were developed. The day ended with the donation of sportswear to the entity.

The RC Celta “Juvenile A” team completed this initiative by organizing a charity match against Porriño Industrial in favor of ACEESCA. The tickets to the match gave the possibility of participating in the draw of an RC Celta T-shirt signed by the players of the first team. In addition, Porriño Industrial donated other gifts for the event.

These are a series of actions that enrich Celta academy players and enhance the values that the club and the Celta Vigo Foundation intend to inculcate in the young Celta footballers.